Professor Steve Toms is Chair in Accounting and Director of Research for Accounting and Finance. His research interests cover the role of accounting, accountability, and corporate governance in the development of organisations, particularly from a historical perspective. The below blog post is based on his paper “Financial scandals: A historical overview”, which was published in Accounting and Business Research. In British and American history, when was financial impropriety most rife ? New research shows, perhaps unsurprisingly given recent headlines, that peak financial scandal is very much a contemporary phenomenon, and may even be about to reach new heights.

History shows peaks and troughs in the incidence of financial scandals and some remarkable turning points. Most notable are the decline during most of the twentieth century and a resurgence from the late 1970s onwards, associated with financialisation: the dominance of the economy by a deregulated financial sector.

For an event to be a financial scandal, there must be a situation or event that has occurred as a result of financial resources being employed in a morally questionable manner where there are serious consequences for third parties, which are widely known. They can involve accounting and financial market manipulation, multiple types of fraud, and corporate bankruptcy. The larger the collateral losses, the greater the scandal’s perception, social impact, and public appetite for financial regulation and reform.

My research uses a database of over 200 corporate financial scandals in the period 1800-2009 and documents the incidence of fraud and other forms of corporate crime over an even more extended period. The graph (blue line) shows the pattern by decade. 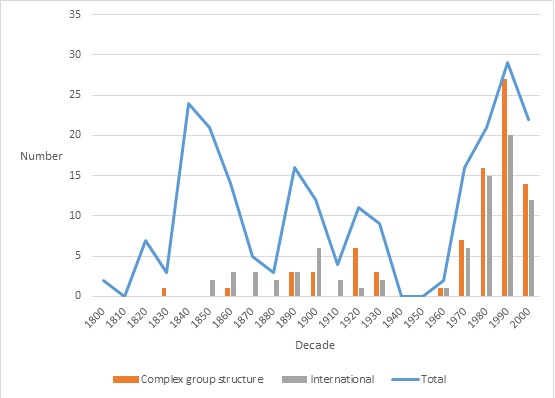 The trend over two centuries shows that financial scandal is far from being a permanent or inevitable feature of business life. True, there will always be individuals predisposed to fraudulent behaviour. What can vary enormously, however, is the opportunity to successfully engage in such activities and the nature of such activities. Three factors cause the variation:

1. The prevalence of specific economic sectors in the economy, most notably banking and financial services.

2. The ability of fraudsters to disguise their activities using complex structures of companies interconnected in business groups and networks.

3. The ability of fraudsters to transfer assets and obligations between international regulatory jurisdictions.

All three of these features explain the resurgence of financial scandals after 1980, as shown in the graph.

Banking and financial services figure prominently in the two most prominent peaks of the graph. The first peak, in the mid-nineteenth century, was associated with banking and railway frauds. Both sectors took advantage of limited liability to expand quickly, and the railways, in particular, were associated with excessive share pushing, made notorious by the activities of George Hudson.

Railway fraud declined as the network was completed and subjected to stringent regulation, including the publication of accounts and the codification of costing methods. Banks, on the other hand, were highly vulnerable to embezzlements by employees in positions of trust. These frauds also declined towards the end of the nineteenth century as banking regulation, branch structure, and audit placed limitations on opportunities to commit such frauds.

The typical early decades of the twentieth century experienced lower levels of financial scandal than the nineteenth century. Accounting disclosure and audit continued to improve matters, prompted in response to financial shenanigans on both sides of the Atlantic in the 1920s and 1930s.

A very remarkable feature was the hiatus between c.1940-1970, which the graph shows clearly. In this period, it is challenging to identify anything but the very occasional financial scandal. In these decades, the corporate economy expanded and consolidated the power of managers, whose priorities were often expansion through takeover and merger, rather than delivering value to shareholders. Banking and finance meanwhile were marginalised, subject to restrictions on international capital movements.

In the 1970s, these structural arrangments began to change. Restructuring and divestment now impacted the corporate sector at the behest of the banks, which after 1979 increasingly benefited from wholesale deregulation.

International capital movements presented new opportunities for fraudsters in tandem with the emergence of secrecy jurisdictions. Many of these operated as satellites of the increasingly powerful City of London, and as well as functioning as tax havens, allowed fraudsters to move money offshore while escaping scrutiny, exploiting the absence of regulation of financial disclosure.

These changes explain the resurgence of financial scandals over recent decades, which can be summarised by some key statistics:

Internationalisation and restructuring facilitated accounting manipulation, which, taken together, are illustrated by the Polly Peck scandal. 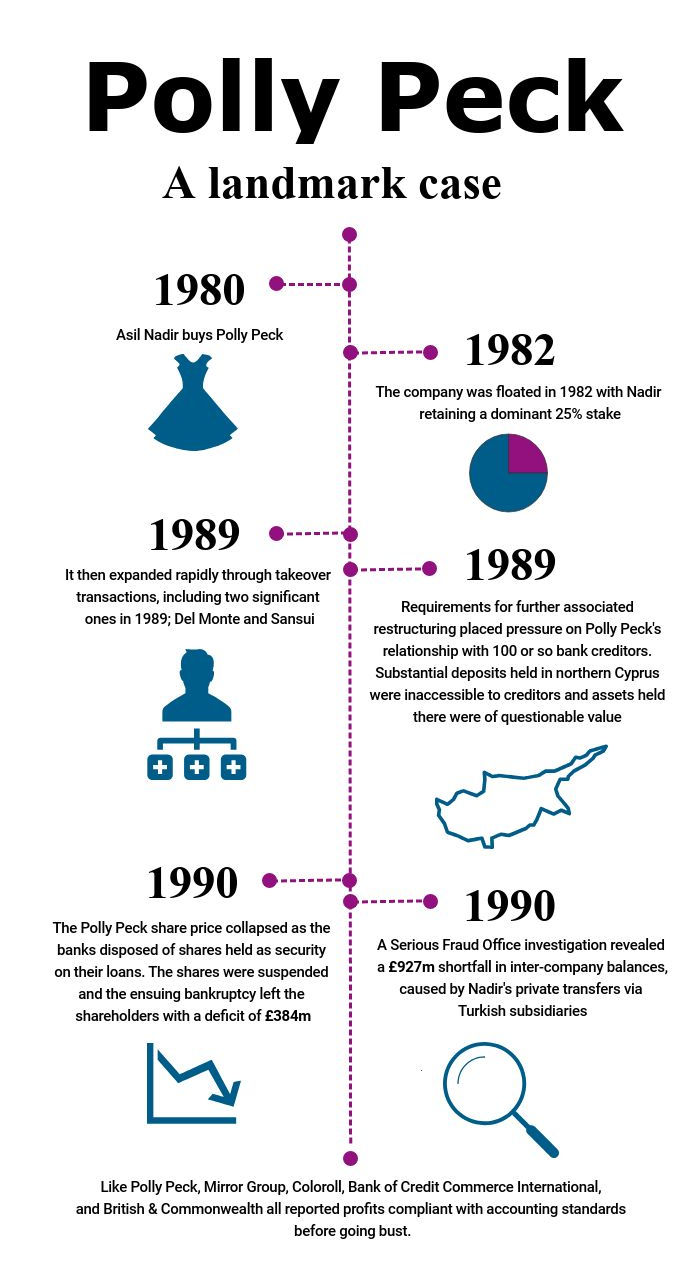 As Polly Peck and the wave of similar scandals in the late 1980s showed, the developing pace of corporate restructuring and internationalisation of the financial sector created new opportunities for shifting funds and profits, thereby escaping accountability. Polly Peck and similar frauds of the time demonstrated that flexibility in accounting standards gave executives the means to satisfy stock market expectations of growth, at the same time as hiding poor performance arising from risky investments and over-expansion.

Following the scandals of the late 1980s, there were moves to improve accounting standards and corporate governance in the UK. These changes restricted the opportunity for accounting manipulation and reigned in the excesses of over-powerful CEOs. Thanks to the combined consequences of these developments, the UK avoided the wave of scandals that engulfed the US with Enron and others in the early 2000s.

The problem has far from disappeared. Most of the factors explaining the resurgence post-1980 are still present. The number of offshore shell companies registered annually by Mossack Fonseca in Panama alone increased from zero in 1977 to 13,287 in 2005. Immediately before its collapse in 2001, Enron had 700 associates, and special purpose entities in the Cayman Islands used to obscure hedging transactions and other funds transfers. The growth of quasi-legal spaces and regulatory avoidance, originating with the London Euromarket, was further strengthened by the development of unregulated financial intermediation, which played a crucial role in the financial crisis of 2007-2008 and its associated collapses and scandals.

An examining of the variation in the incidence of financial scandals over the past two centuries reveals three interacting determinants:

These determinants explain the rebound in fraud and financial scandals in the last few decades of the 20th century, and up to and including the global financial crisis. Until these factors are moderated, either through regulation, rebalancing of the economy away from finace, or both, financial scandal is the new normal.