Dr Sourindra Banerjee is a Lecturer (Assistant Professor) of Marketing at Leeds University Business School, University of Leeds. His research addresses managerially relevant questions by applying cutting edge econometric models on large empirical datasets. Dr Jarrod Vassallo is a Lecturer of Social Entrepreneurship at the University of Sydney Business School. Dr Vassallo’s current research is focused on the role that social enterprises and other hybrid organizations play in contributing to the 17 UN Sustainable Development Goals. This article was first published on GlobalDev and has been reposted here with permission.

The creation of new services and products to tackle poverty can be driven by different types of organizations. As this column reports, ‘hybrid organizations’ – those that lie somewhere between for-profit and not-for-profit organizations – have varying degrees of success in delivering social innovation depending on where they operate. Not-for-profit hybrids tend to have more success in markets with lower development levels, while for-profit hybrids are more likely to succeed in markets with lower social diversity. To ensure that such organizations have a good chance of alleviating poverty, business owners need to match their choice of hybrid form with the characteristics of their location.

Social innovation – the creation of new services and products to solve social problems – is an important means for achieving the United Nations Sustainable Development Goals, which aim to ‘end all forms of poverty‘ by 2030. Social innovation occurs in the public, private, and non-profit sectors, and increasingly in non-traditional organizations that lie somewhere between these sectors. As such, it has been argued that most social innovation is driven by hybrid organizations.

Hybrids don’t all have the same organizational structure and way of working. Rather, they exist in various forms on a spectrum between traditional profit and not-for-profit organizations. They have been found to be particularly prevalent in ‘bottom-of-the-pyramid’ markets.

People living in such markets are financially excluded: they do not have access to cheap and fair mainstream financial services and products. Financial inclusion remains a large problem across the globe, with approximately 2.5 billion adults around the world without bank accounts. 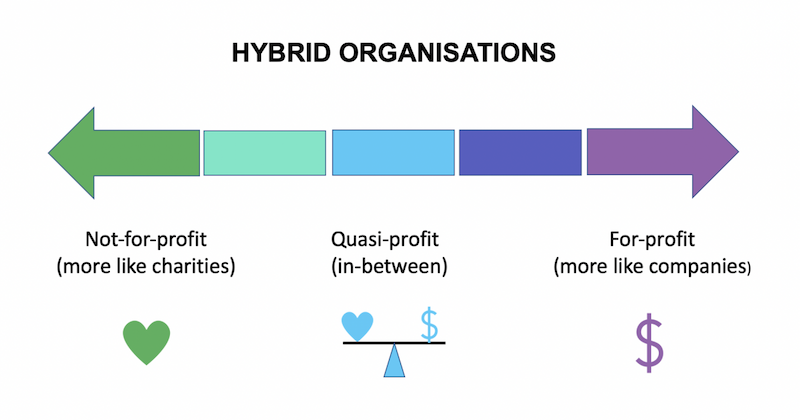 Microfinance is a good example of successful social innovation. It is a hybrid form that can help those living in poverty to get access to finance via group lending schemes in situations where they would traditionally be unable to obtain a bank loan.

Our research focuses on microfinance Self-Help Group (SHG) Foundations in India. One in five people are living below the international poverty line in the country, and so the need for other forms of access to finance is vital.

SHGs are sometimes referred to as lending circles or community savings groups. In India, SHGs often refer to a group of 12 to 20 people from the same social class (usually poor women) who meet regularly to contribute to a savings pool and an understanding of how finance works.

SHGs are considered a major social innovation as they offer a novel solution in terms of their business model (group lending) and product offering (non-collateralized loans for the poor and previously excluded). They are also more effective, efficient, and sustainable than more traditional solutions such as individual banking.

Our analysis shows that hybrid forms closer to the centre of the hybrid spectrum (quasi-profit hybrids) are more likely to attain greater reach and value in bottom-of-the-pyramid markets overall.

Quasi-profit hybrids are adapted to balance financial self-sufficiency with social impact requirements compared with hybrids towards the extremes of the spectrum. This affords them relative advantages in navigating the tensions faced by organizations engaged in social innovation.

Although quasi-profit hybrids are more prevalent and achieve greater usage overall, they are not ideal in all market conditions. One of the biggest examples of difference relates to development levels, in particular the unequal provision of physical resources.

Conversely, the logic of welfare maximization dominates commercial reasons in not-for-profit hybrids. As social logic emphasizes directing resources to those most in need, these organizations will focus on markets with lower development levels where substitutes are less available.

Previous research has shown that social diversity is negatively associated with social capital, especially trust. In these markets, social innovation relies more on trust than their traditional alternatives. For example, microfinance is commonly administered through group lending schemes (such as the SHGs), unlike traditional banking loans.

The usage achieved by an established social innovation depends on the ease with which it diffuses within a population of users. Diffusion tends to be faster within social groups rather than across them, partly due to higher trust between members.

Because more socially diverse communities suffer from lower trust, organizations that operate in them will experience greater risks to financial returns and greater barriers to diffusion, leading to reduced profitability.

Relative to not-for-profit and quasi-profit hybrids, for-profit hybrid organizations are more widespread and have greater usage in bottom-of-the-pyramid markets with lower social diversity. 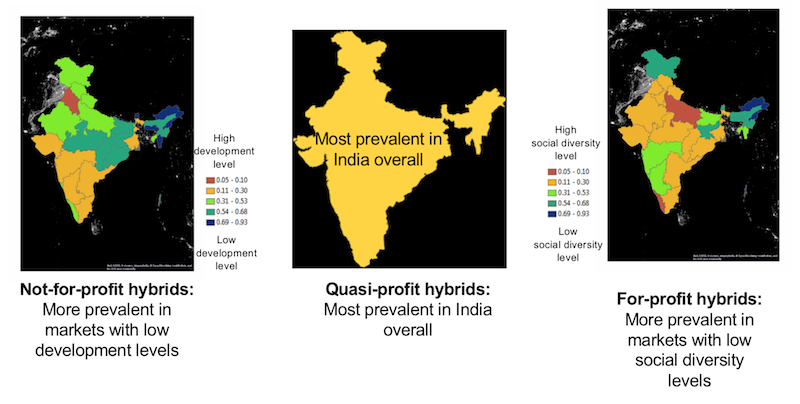 This diagram has been added to the Business School’s Research and Innovation blog post and did not appear in the original GlobalDev article.

Implications for managers and policy-makers

When planning to enter a new bottom-of-the-pyramid market, a manager’s ability to match their choice of hybrid form with market characteristics (for example, levels of development and social diversity) is likely to affect the outcomes of social innovation.

Managers and policy-makers should favor quasi-profit hybrids as a vehicle for the spread of social innovation focused on financial inclusion within bottom-of-the-pyramid markets that resemble the Indian context.