Dr Danat Valizade is a lecturer in quantitative methods at Leeds University Business School and a member of the Centre for Employment Relations Innovation and Change. His research interests concern the fields of employment relations and institutional labour economics, with a particular focus on the outcomes of dynamic segmented labour markets for employees, trade unions and employers. This blog is based on preliminary findings from an ongoing research project conducted in collaboration with Professor Robert MacKenzie, Professor Chris Forde and Dr Hugh Cook. The most recent economic crisis has distorted the labour market in the United Kingdom. During and after the recession, employees’ job security was compromised and real wages decreased considerably so as to prop up the competitiveness of the UK economy in the global market.

Such negative ramifications are traditionally cushioned by trade unions, who protect union members through deliberations with management and collective bargaining at the workplace level. Such a capacity, however, has been called into question, as recent decades witnessed a diminishing role of trade unions in the UK.

Union membership density has shrunk to roughly 15 cent in the private sector, leaving a majority of the British workforce unprotected from economic downturns. Merely a quarter of the UK workforce, predominantly in public sector organisations, is covered by collective agreements between trade unions and employers that secure pay levels and provide workers with fringe benefits.

In an ongoing research project, led by Professor Robert MacKenzie alongside Professor Chris Forde and Dr Hugh Cook, we are investigating the trajectories of pay rises in unionised workplaces during and after the recession. The project is supported by regional offices of the Trades Union Congress and the Institute of Employment Rights.

The appetite for such an agenda was fostered by a lack of theoretical and empirical understanding of how, given recent changes in the labour market, trade unions fare against a backdrop of a severe economic crisis.

On the one hand, there is room for optimism, as trade unions have maintained a wage premium for their members at around 10 per cent on average, with a higher premium in the public sector. On the other hand, Neoclassical theories of labour markets (predicated upon the assumption that economic agents, like employers, are perfectly rational and driven by an overarching goal of maximising outputs per unit of resources) would predict that pay rises may have been offset by reductions in job security and working hours.

To address these ideas, we administered a survey of trade union workplace representatives and negotiators in England. Using Latent Class Analysis (a quantitative technique for unravelling the structure of a diverse population) trade unions were clustered into three groups according to pay rises achieved between 2009 (the onset of the economic recession) and 2013 (a heyday of economic recovery).

We found that one of the clusters, accounting for roughly a quarter of sampled workplaces, attained real wage increases (at or above the inflation rate). The graph below demonstrates this tendency, showing a striking gap between these relatively successful trade unions and two other clusters of unionised workplaces.

Approximately 90 per cent of workplaces in cluster three had attained real pay rises in the five years examined, a share that declined marginally in 2013, remaining nonetheless at substantially higher levels compared to other workplaces. That is, employee well-being in the respective workplaces had probably passed safe through the most tumultuous economic times, despite mounting financial uncertainties and growing unemployment. 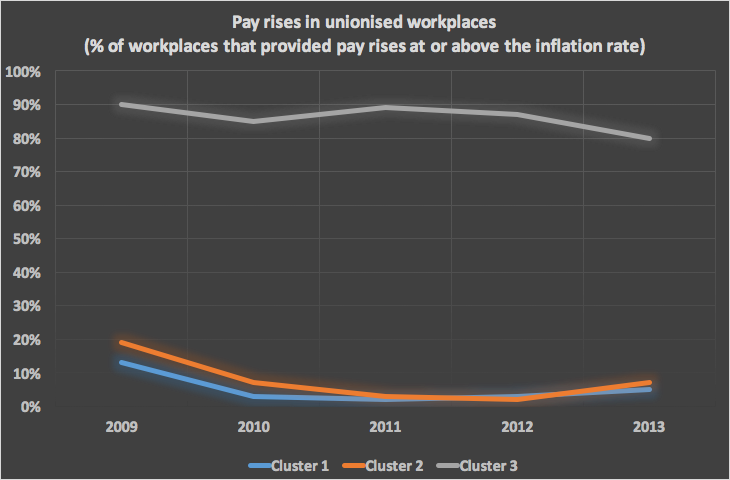 The second graph (see below) shows further profound differences between the workplaces that achieved real wage increases and other workplaces. For example, a majority of organisations in cluster one had to cut or freeze wages during and in the aftermath of the recession. The situation has somewhat improved during the period of post-crisis recovery (in 2012-2013) in that only half of the workplaces in cluster one continued to drive down real wages. Yet, employees in such workplaces were, and still are, considerably worse off compared to the rest of our sample.

It comes as a surprise that almost a quarter of sampled workplaces orchestrated real wage increases, given a rapid decline in trade union power in the UK. The bulk of cluster three (characterised by real pay rises), was composed of private sector enterprises while cluster one was formed largely by public sector organisations. This sectoral effect is perplexing, as private sector trade unions were hastily condemned to irrelevance by some commentators. Conversely, our findings revealed effectiveness with which many of the private sector trade unions responded to the recession. 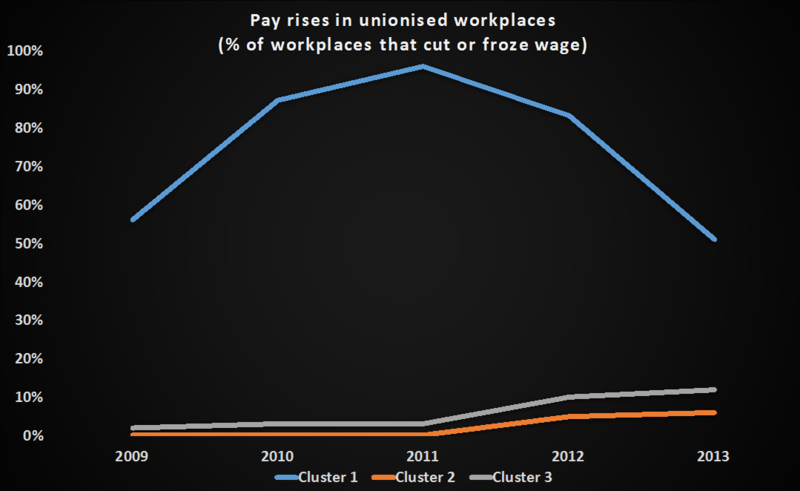 We then turned to plausible trade-offs for real pay increases. Subsequent regression analysis demonstrated, quite convincingly, that the workplaces where trade unions extracted real wage increases also provided their employees with higher levels of job security, which, contrary to a Neoclassical economic rationale, was amplified during and in the aftermath of the recession.

Put simply, employees who got pay increases above the inflation rate were at the same time protected from layoffs and redundancies and, perhaps, enjoyed working conditions superior to those before the economic crisis.

What drives such disproportionate trajectories? Are we witnessing the resurrection of trade unions, particularly in the private sector? These are the questions to which we have yet to find a definitive answer.

A conventional economic argument implies that workplaces which secured higher pay rises did so because of their privileged position in the market wherein an increase in labour costs does not create downward pressure on the demand of the firm’s products and services.

Needless to say that we are quite sceptical about such an explanation. It would not come as a surprise if the same workplaces that extracted real pay rises operate in competitive markets, which may have spurred progressive industrial relations between trade unions and management that accrue benefits to all parties involved. Further research is required to determine whether these findings imply an efficient model of employment relations.