Dr Kate Hardy, Dr Vera Trappmann and Dr Charles Umney are Associate Professors in the Work and Employment Relations Division (WERD). This article was first published on the Centre for Employment Relations, Innovation and Change (CERIC) blog. The event is sponsored by the CERIC and Leeds University Business School. Universal basic income and the future of work

In the face of widening disparities of wealth, changes in work and employment in which low pay dominates and the ability of work to lift people out of poverty declines, debates about the future of social protection have come to the fore. In contexts from the Global South to the ‘developed’ North wage labour appears decreasingly able to distribute social wealth or protect individuals and households from poverty.

In this context, scholars, activists and policy makers have begun to examine alternatives to existing systems of welfare, including negative income tax, cash transfers and universal basic income and guaranteed minimum income. Basic income has become the most visible and perhaps most contested of these proposals. The notion of a universal basic income – a non-conditional base income for all citizens – has attracted increasing popular purchase within social movements, institutions and governments. Numerous academic pilot experiments from Canada to Namibia and India have been undertaken, while governments are rolling out experiments in Finland, Barcelona and Utrecht. Proponents of basic income have been drawn from across the political spectrum, finding support from Milton Friedman and Bill Gates, to Frances Fox Piven and Shadow Chancellor John McDonnell.

On Friday 26 January 2018, CERIC will host a workshop bringing together theorists, practitioners and social movements. The day long workshop will explore this topic, focusing on basic income, wage labour, work and employment, by asking: 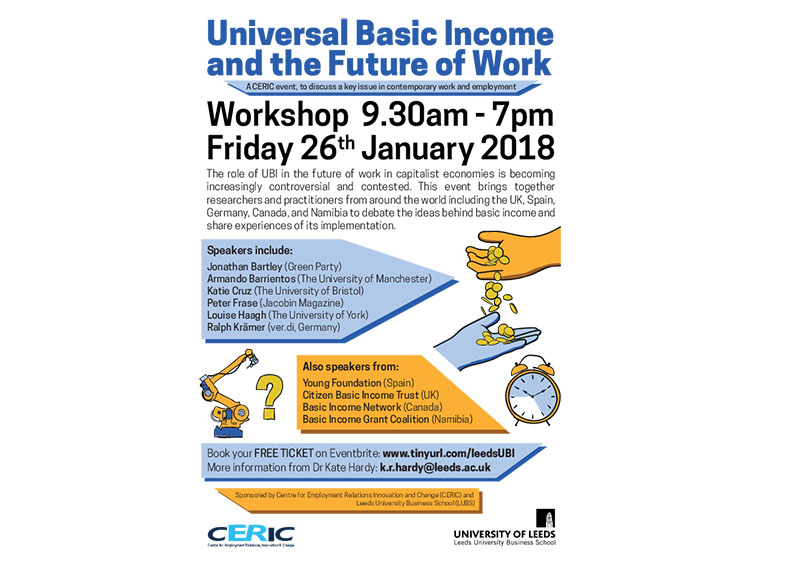