Dr Zlatko Bodrožić is a lecturer in information management at Leeds University Business School. His current research focuses on the evolution of technologies, organizational intervention, organizational paradigms, and management models. In particular, he is interested in digital transformation. His PhD was in work and organizational sciences from the University of Helsinki, Finland.
Professor Paul S. Adler is currently Harold Quinton Chair of business policy, and professor of management and organization, sociology, and environmental studies at the University of Southern California. He has published widely in academic journals, edited several books including The Firm as a Collaborative Community: Reconstructing Trust in the Knowledge Economy (2006), The Oxford Handbook of Sociology and Organization Studies: Classical Foundations (2009), The Oxford Handbook of Sociology, Social Theory, and Organization Studies: Contemporary Currents (2014), and co-authored Healing Together: The Labor-Management Partnership at Kaiser Permanente (2009). This article was originally published on the LSE Business Review in September 2018.

Scientific Management, Human Relations, and Strategy-and-Structure are well-known management models in the history of business, but we still understand little about why a given model succeeds in competition with other models. This lack of understanding is troublesome. Practitioners would benefit if they could assess more reliably the potential value of the various competing models they read about. Our analysis of the historical record led us to conclude that management models succeed when they respond effectively to the organizational challenges and opportunities created by successive waves of technological revolution.

We propose a framework that theorises this connection as three nested and interacting processes. First, we see several successive waves of technological revolution, each of which prompted a corresponding wave of change in the dominant organizational paradigm. Neo-Schumpeterians have identified several major revolutions. The four most recent are steam power and railways, steel and electric power, automobile and oil, and computers and telecommunication. Second, nested within these waves, we see two successive cycles – a primary cycle which generated a new management model that obsoleted the prior organizational paradigm, and a secondary cycle which generated another model that consolidated the new paradigm by mitigating the dysfunctions of the primary cycle’s model. Third, nested within each of these cycles, we identify a problem-solving process in which the development of each model passed through four main phases during which various related management concepts competed for dominance. In the following, we recapitulate the sequence of models across the four main waves of technological revolutions (see Figure 1).

Figure1. Models across the four main waves of technological revolutions 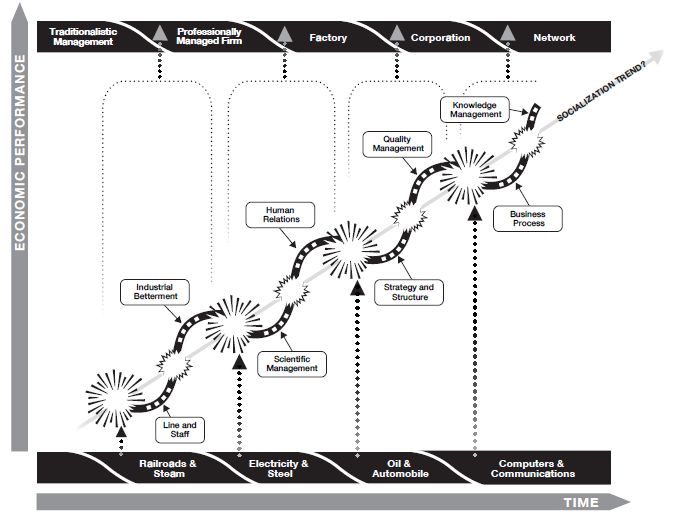 The steam and railways revolution of the mid-19th century yielded the “Line-and-Staff” model, characterized by specialized line and staff managers. This was the first step in the emergence of a new organizational paradigm that we call the Professionally-managed firm, characterized by the employment of professional managers not linked to the owner by family ties. This cycle also led to a degradation of working and living conditions for the workers who staffed the railroad operations and who were thus scattered far from their communities and families. This degradation exacerbated industrial conflicts, which in turn led to a secondary cycle that gave rise to the “Industrial Betterment” model. Industrial Betterment did not undo the Line-and-Staff model, but added a counter-balancing social function that was responsible for improving workers’ living and working conditions. Occupationally, we see the emergence of the welfare secretary role (which subsequently evolved into the personnel manager).

The steel and electricity revolution of late 19th and early 20th century yielded the Scientific Management model based on workflow optimization and capitalizing on the acceleration of production afforded by the new technologies. This inaugurated a transition to a new organizational paradigm that we call the Factory, symbolizing a unitary, centralized organization. This model also led to high turnover and low morale of workers due to the close control over how and how fast tasks were performed. The resulting conflicts provoked a secondary cycle that yielded the Human Relations model, based on counselling and supervisory techniques that responded to the alienation induced by rationalized workstation operations. Human Relations did not undo Scientific Management but rebalanced the Factory paradigm.

The automobile and oil revolution of the mid-20th century yielded the Strategy-and-Structure model based on differentiating internal structure and business-unit strategies so as to support the production, marketing, and sales of differentiated products to different customer segments. This contributed to the establishment of an organizational paradigm that we call the Corporation, representing the multi-divisional mass-production firm with strategic integration but operating autonomy in the divisions. The new model eventually led to poor quality and service, low worker involvement, lack of cooperation and political games among managers. These problems provoked a secondary cycle aimed at quality, organization culture, and organization learning. The Quality Management model that emerged in this cycle recommended a management system that involved personnel at all levels in continuously improving product and process quality. It did not undo the Strategy-and-Structure model but remedied its dysfunctions and stabilized the Corporation paradigm.

Our analysis of the most recent wave is more tentative because that revolution is only now reaching the critical inflection point where computers and telecommunication begin to transform a wider range of industries and functions. As we see it, the first cycle of this revolution yielded the Business Process model, based on the redesign of business processes up and down the value chain, redrawing internal and external boundaries, and externalizing “non-core” activities. This model contributed to the establishment of a new organizational paradigm that we call the Network, where units within and across organizations are interlinked by rationalized processes supported by digital technologies. This cycle seems to have led to the neglect of the human element and thereby weakened the innovation-generating capacity of firms. These problems, in turn, have provoked a secondary cycle that has encouraged the emergence of a cluster of concepts that appears to be cohering around Knowledge Management and novel types of communities of practice.

Our theorization aims to go beyond the accounts that see new management concepts and models as an endless stream of fads and fashion. While we agree that many contemporary concepts show only a faddish quality, our neo-Schumpeterian approach links the popularity of concepts and models to their ability to help firms deal with the distinct organizational challenges created by each technological revolution.

In future research, we hope to address the changes in the broader institutional context that are implicated in each of these technological revolutions. Indeed, each revolution seems to have required a substantial institutional change—think, for example, of the key role of the US government after World War II in funding highways and subsidising home-ownership as a precondition for the diffusion of models of the automobile and oil revolution. We might wonder: What are the corresponding institutional changes that would enable the computers and telecommunication revolution (including its newest instantiations) to fulfill its potential to revolutionize industry beyond the ICT sector, in sectors such as manufacturing, healthcare, and education? We hope to build on work by Perez (2010) and Mazzucato (2015) in this future research.