Mirta Galesic is a Professor at the Santa Fe Institute. Wändi Bruine de Bruin is a Professor at Leeds University Business School, where she co-directs the Centre for Decision Research. She is also affiliated with the Center for Economic and Social Research at USC Dornsife, and Carnegie Mellon University. This blog post was first published on The Evidence Base (link no longer available). While the full analysis of how wise the crowds really were will have to wait until after the election, we can look at some of the initial results.

Two ways of harvesting the wisdom of crowds

In our Presidential Election Poll, we rely on the wisdom of crowds by asking for people’s expectations about election results in two ways.

First, we harvest the wisdom of crowds by asking people about their expectations of how all Americans will vote. Here, we ask people about the percent chance that each of the candidates will win the election. Previous experience with this approach has shown it to yield accurate results; for example, in the 2012 election, people’s answers to this question have consistently pointed to the actual election winner.

Why might the question about the percent chance that each of the candidates will win work so well? It is believed that it taps into the crowd’s wisdom about their social contacts. Indeed, people can give quite accurate reports about various properties of their social circles.

This leads us to the second way we harvest the wisdom of crowds: using a question that asks people directly about voting behavior of their adult friends and family. People are asked to report what percent of those social contacts who are likely to vote might choose each of the candidates.

How might asking people about their social circles be helpful?

We think that people’s reports about the percent of their social contacts voting for each of the candidates can improve our predictions of voting behavior in at least three ways. First, these reports can give us a glimpse about what’s going on with the parts of the population that are not well represented in the polls. Second, reporting about social circles might be more truthful than reporting about own voting intentions. And third, the reports can help us understand whether people supporting different candidates live in ‘echo chambers’ in which they mostly socialize with like-minded people.

Election predictions based on reports about own voting intentions will often be affected by peculiarities of a particular survey sample. If a sample by chance includes a bit too many Democrats, the resulting survey estimates might be skewed towards Democrats’ preferences; and vice versa.

Election predictions based on expectations about how all Americans will vote (the first way of harvesting wisdom of crowds mentioned above) could also be skewed, this time towards the national polls people hear about from the media. To the extent that the polls are erroneous, people’s expectations will also be inaccurate.

Predictions based on social circles might therefore fall somewhere in-between more extreme polling predictions. Is that indeed the case? Figure 1 shows preliminary results from the three waves of the Presidential Election Polls in which the social circle questions were asked so far. Predicted lead (or lag) of Trump compared to Clinton based on social circle reports typically falls in-between own vote intentions on the one hand, and population-level win expectations and national polls on the other hand.

Of course, only time will tell which of these predictions were more accurate about the elections. 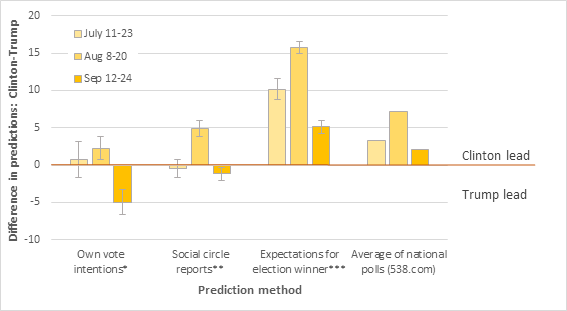 Reducing social desirability of answers about likelihood of voting

Voting is typically seen as a socially desirable behavior, and people might be reluctant to admit that they won’t vote. But when reporting about their friends, people don’t have to embellish their answers. Therefore, the social circle reports might be more accurate indicators of actual election turnout than reports about own likelihood of voting.

The social circle question also allows for investigating how homogenous are the perceived social circles of Trump and Clinton voters. Is one or the other group more likely to live in an ‘echo chamber’, surrounded by people with similar views? Our results suggest that both groups live in quite homogeneous social circles, with a large proportion of their social contacts sharing similar political views.

In further analyses after the elections, we will be able to determine how useful the additional information form social circle reports really is for election predictions. Meanwhile, these reports might already provide valuable information about the social desirability of voting and about echo chambers of different groups of voters.