This blog post is based on the article originally featured on Psychonomic Society – “From a tweet to Reddit and beyond: The road to a global behavioral science SWAT team” – and has been republished with permission. It is part of a series of blog posts over two weeks from different researchers on perspectives about research in crisis.

The COVID-19 crisis has challenged all sectors of society, including science. The crisis demands an all-out scientific response if it is to be mastered with minimal damage. This means that we, as a community of scientists, need to think about how we can adapt to the moment in order to be maximally beneficial. How can we quickly and reliably deliver an evidence base for the many, diverse questions that behavioral science can inform?

The earlier posts this week have highlighted the accomplishments, challenges, and new approaches to create “science without the drag” ie providing a quick and effective response without sacrificing the quality of the research. This post illustrates how the new way of crisis knowledge management can work, and how it can yield results from around 15,000 participants around the globe to provide policy-relevant answers about people’s attitudes.

So here is my story, and that of the others involved: Stephan Lewandowsky, who is one of the principals behind SciBeh.org, and Simon Dennis, of the University of Melbourne, who studies how people remember events from their lives.

As events unfolded in March, I checked Twitter frequently to find out about new and ongoing behavioral science research on the COVID crisis, discussions on existing research, and new ideas about how behavioral scientists could contribute to address the crisis. It seemed apparent to me that in a crisis like this it would be essential to join forces and avoid duplicating efforts, as well as to provide a rapid response that crucially would not sacrifice the quality of research. Scrolling through Twitter, I came across a pre-print (a draft research paper that is shared publicly before being peer-reviewed) that outlined a set of initial ideas to tackle some of these issues, which also mentioned the new @SciBeh Twitter account for discussions of relevant information.

Through this account I learnt about the r/BehSciResearch (Behavioral Science Research) Reddit forum, where I saw a description of the project on “Social licensing of privacy-encroaching approaches to address COVID”:

The nature of the COVID-19 pandemic may require governments to use big data technologies to help contain its spread. Countries that have managed to “flatten the curve”, (e.g. Singapore), have employed collocation tracking through mobile Wi-Fi, GPS, and Bluetooth as a strategy to mitigate the impact of COVID-19 (…). The effectiveness of collocation tracking relies on the willingness of the population to support such measures, implying that government policy-making should be informed by the likelihood of public compliance. …

This project involves a longitudinal cross-cultural study to trace people’s attitudes towards different tracking-based policies during the crisis. At present, we are planning 4 weekly waves in Australia, at least 1 wave in the UK (data collection currently underway), several waves in Germany, at least one wave in the U.S., and we are reaching out to collaborators and colleagues in other countries to broaden our scope.

We aim to understand (1) the factors that influence the social license around governmental use of location tracking data in an emergency, (2) how this may change over time, and (3) how it may differ across cultures (…).

I felt that findings from this project would have important implications for policy decisions, and that its open science approach was more needed than ever. The preregistered protocol, survey materials, preliminary analyses and results helped me to better understand what the project involved exactly.

As the Reddit post mentioned that the team was hoping to broaden the scope internationally, I decided to post a response offering to contribute by expanding data collection to Spain, which was badly hit by the crisis. Following discussions via email and via a Slack (a platform for teamwork) group involving international team members, we launched the first data collection wave in Spain in late April, with a second wave planned shortly.  The University of Leeds provided internal funds to cover participant recruitment costs considering the scale of this global effort and its focus on a relevant and pressing topic.

The Spanish data and preliminary analyses can be found here.

That was my story. But how did this project get off the ground in the first place?

To understand that, we turn to Simon Dennis, of the University of Melbourne, whose research involves the use of big personal data sources (GPS, accelerometry, audio, and images) to study people’s ability to remember events from their lives. How to preserve participant’s privacy is an ever-present concern in this research and for the last decade, Simon and his team have been constructing a privacy-preserving architecture to make this possible. The architecture is reported in two articles here and here.

The rest, as they say, is history. Here is Simon’s story:

“The contribution of my team to the COVID project began in mid-2018 when we were awarded an internal grant to investigate the attitudes of stakeholders to the use of the University of Melbourne’s wifi data. We developed a paradigm in which participants are given hypothetical projects and then asked to rate these projects on a series of privacy dimensions. They then made a decision about whether the project should be allowed to proceed. When the pandemic hit, we decided to adapt our approach to contract tracing technologies.

I tweeted about our intentions.

Out of the blue, Stephan Lewandowsky responded to my tweet by email from the University of Bristol (on 20 March, two months ago), and the international coalition was born.

At the same time, I had been part of discussions with the Dean of our faculty as he sought to coordinate our response. I indicated what we wanted to do. He had me write a brief funding proposal and within two days we were supported by philanthropic funds. I was also contacted by a member of the government’s Australian Health Protection Principal Committee, which was constructed to advise the government on the crisis – and so our results have had a direct conduit to the government’s deliberations. We have now conducted three iterations of the survey in Australia. The government recently released the Covidsafe app, and so our last wave was focused on motivations for downloading the app and the impediments that participants perceived.”

The Australian team thus provided the background experience with privacy and associated issues, and their tweet announcing their intention was picked up by one of the SciBeh.org team, which quickly led to the description of the study being posted on Reddit, which is how I became involved.

From here on the project snow-balled through a mix of personal contacts and networks, and approaches by email to Stephan Lewandowsky by other researchers who had learned of the project on Twitter or Reddit. We obtained funding in small instalments from various internal sources and discretionary funds: For example, Rob Goldstone of Indiana University chipped in enough for an American wave, Klaus Oberauer was able to fund the Swiss wave, the Max Planck Institute for Human Development in Berlin (Ralph Hertwig, Philipp Lorenz-Spreen, Anastasia Kozyreva, and others) was able to fund several waves in Germany, and the University of Bristol provided funds through an internal rapid competition for COVID-related research. On top of that, the project was facilitated by the decision of Prolific to waive their fees for representative samples in the US and UK for this project because of its importance vis-à-vis the pandemic. This is a non-exhaustive list of collaborators and funding sources, but it provides a flavour of the diversity of the funding sources and the people involved in the collaboration (a full list of collaborators can be accessed here).

So what has come of this new collaboration, which now involves researchers from Japan, Taiwan, Spain, Hungary, Germany, Switzerland, Australia, the US, and the UK? We have collected data from all those countries (although we are still awaiting the Hungarian results), involving more than 15,000 participants to date. The data are constantly being reported in a “living document” here that is being updated as new data roll in. The document emphasizes that analyses are ongoing and encourages readers to report comments or bugs either via email or via Reddit.

The graph below presents a snapshot of some of the data collected to date. 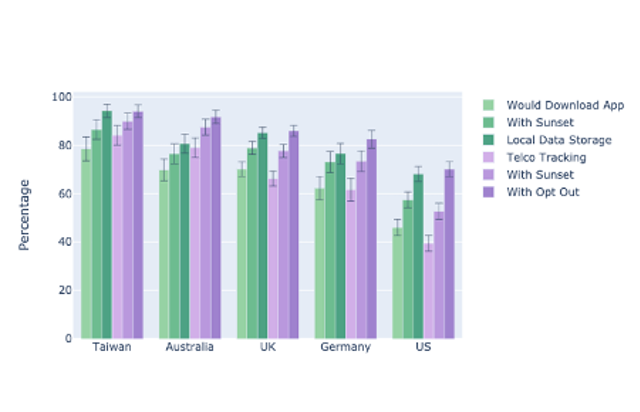 It shows the proportion of participants who indicated they would download a voluntary government app (in green), and who found mandatory tracking through telecommunications companies acceptable (purple). We probed acceptance under various circumstances, either without any further conditions (left-most bar in each cluster), or with some additional constraints.

‘Sunset’ refers to a sunset clause, in which governments legislate promises to stop tracking and delete the associated data within six months. ‘Local data storage’ refers to when tracking data is stored on a user’s device, rather than a central repository.

The data show that acceptance of tracking technologies is generally high in most countries, with the exception of the US, where scepticism is greater. Respondents from Australia and Taiwan showed the highest level of support. In these hypothetical scenarios, it didn’t appear to matter terribly much whether it was the government asking for voluntary compliance (green bars) or whether it was mandated by the government and the telephone companies were forced to provide tracking data (purple bars). A more in-depth report of these data can be found on the Conversation. Ongoing analyses are examining how acceptance relates to factors such as trust in the government and perceived severity of COVID.

The Reddit forum and Slack group for this project have not only served as useful platforms to critically discuss specific aspects of the research and share relevant literature and knowledge with a large group of researchers worldwide, but have also helped us to identify new funding opportunities. Following discussions via Slack, we recently submitted a joint funding application to the Worldwide Universities Network to support future data collection efforts, led by colleagues at the National Cheng Kung University in Taiwan. This collaborative forum has also led to discussions about other controversial policies under consideration by governments such as issuing “immunity passports” to people who have a positive antibody test result, and we are now also examining people’s attitudes towards this issue. Preliminary immunity passport results can also be found in the live report of the project.

Overall, I believe this project helps to illustrate the potential of truly collaborative efforts that can help to scale up resources globally. This seems to be a promising way to start tackling some of the global challenges that the behavioral sciences can contribute to. The COVID crisis is just one example of a situation that calls for “science without the drag”—our team may be the foundation for a global behavioural science SWAT team that can use the infrastructure and procedures created here, to be prepared for the next crisis.