The Be Curious Festival is an annual Research Open Day at the University of Leeds where the general public can find out what happens in a university through lots of family-friendly activities. Understanding the importance of communicating research beyond academia, I decided to participate in this year’s Festival, which took place on 30 March, to talk to the public about my research on evacuation. In particular, I wanted to showcase my current Evacuation project (funded by a two-year EU Marie Sklodowska-Curie Individual Fellowship) and crowd science in general.

I wanted to teach visitors the following key points from evacuation and crowd research:

(1) Orderly evacuations can be safer and quicker than when people run and push; communication and leadership can be key here to make sure people evacuate in a calm manner and don’t run.

(2) Your mood influences how you experience crowd densities and this is useful in crowd management and your experience of an event.

(3) A moving crowd has a different ‘safe’ crowd density than a crowd standing still.

(4) You can use both smart technology and very simple maths to count and manage people in a crowd.

I came up with activities that were suitable for all ages, so everybody could enjoy the event! I asked my seven year old daughter to be my assistant, so she could explain the activities to other children and it was great to have her father help on the day as well. Preparing to manage the visitors and activities as a family really made me enthusiastic and I was looking forward to it.

Activities on the day

Bottles: Visitors started in small groups, trying to pull strings with a blue obstacle attached through a narrow bottle opening. The blue obstacles represented people evacuating a room together, as quickly as possible.

The participants did this the first time without communicating to each other, and the second time whilst communicating. In more than 90% of cases, people were faster the second time when they communicated with each other. The first time the obstacles created a congestion. The second time people came up with a strategy to remove the obstacles from the bottle one by one. Leadership appeared spontaneously, by one of the visitors (sometimes a parent, other times one of the children), telling others what to do and who could leave first.

I explained that when people run, they could fall, which is dangerous and creates congestions at exits. This makes the overall process longer compared to if everybody walked slowly and exited one by one.

I explained about leadership and communication, how, for example, a member of staff can tell people what to do in person or through a public address system. We also talked about how this relates to the visitors’ experiences of fire drills at school or work. Some visitors also tried the same kind of scenario in other bottles filled with little sweets. In this case, poking the sweets with a stick, allowed the sweets (representing people) to escape easily. This was related to research on placing a pillar close to an exit to guide the flow of people out through the exit. In the research process itself this was explored through both computer simulations and experiments with humans in a real room with an exit and pillar. 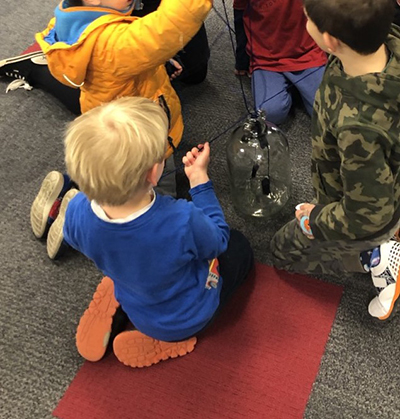 Children trying to pull obstacles on strings out of a bottle

Balloons, Squares and a Circle: Next, the visitors could experience how mood can influence their experience in a crowd. One-by-one, I let them ‘feel’ how it is to stand all alone in a square metre (taped off on the floor). Then I asked them to fill up the square slowly to the maximum number of people we could fit in. I then asked them how they felt and how comfortable they were.

Next, I told them that we were going to play a game and then come back in the square. We played a game where I threw more and more balloons, which they had to keep up in the air all together. People were laughing and working together and were also asked to come up with a team name as well. After the balloon game, everybody went back in the square and most of the times people felt more comfortable being so close together, especially the adults. We discovered that having fun together and working together could make us feel more connected and thus tolerate being so close together when back in the square. Of course, a few people still did not feel comfortable in a very densely crowded space but it does work for the majority.

I then placed a rope around the people in the square and asked them to walk a few metres staying within the rope (which represented a square metre). Then I asked them to only walk with about three or four people in it. People observed how smoothly they could walk with less people and learned that up to about four people per square metre, you can still move your limbs and it feels quite smooth.

We also had visitors with prams. When we put them with us in the squares, the spaces got filled up very quickly! The prams took about half of the square. This tells us to have to find out what kind of visitors come to an event, because many prams means you will have room for less people per square metre. 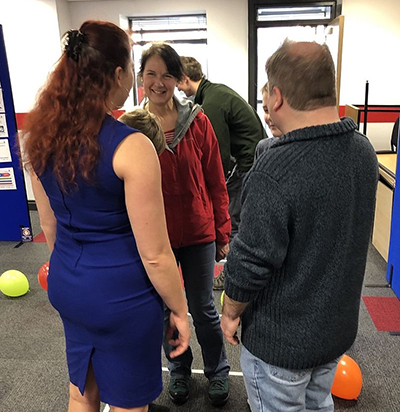 Standing in a square metre

Quiz: Finally, I invited the attendees to take part in a quiz. I had four pictures hanging with screenshots from a simulated crowd with people in different crowd densities. I only told the visitors the size of the area in which the people in the picture were standing (625 square metres). They were asked to either estimate the total amount of people in a picture or guess the number of people per square metre. They had an idea of how many people fit in a square metre from the previous exercise. Still the estimations ranged from a few hundred to tens of thousands! Our record on the day was 12 people inside a square metre (including children; when it was just adults the maximum number was eight), so if they had allowed for a maximum of eight or 10 people per square metre, they could have calculated that 6250 (10 x 625) would be the maximum number of people in the pictures.

It showed us how difficult it is to estimate how many people are standing in a crowd, judging from a picture. I showed pictures of command centres for crowd managers in which similar photos would be hanging on the monitors to give the security staff an idea of what the crowd in different densities would look like in a certain area. People were impressed with this.

Reward time: I had stickers, stamps and sweets for visitors that completed activities and the children got to keep the balloons. 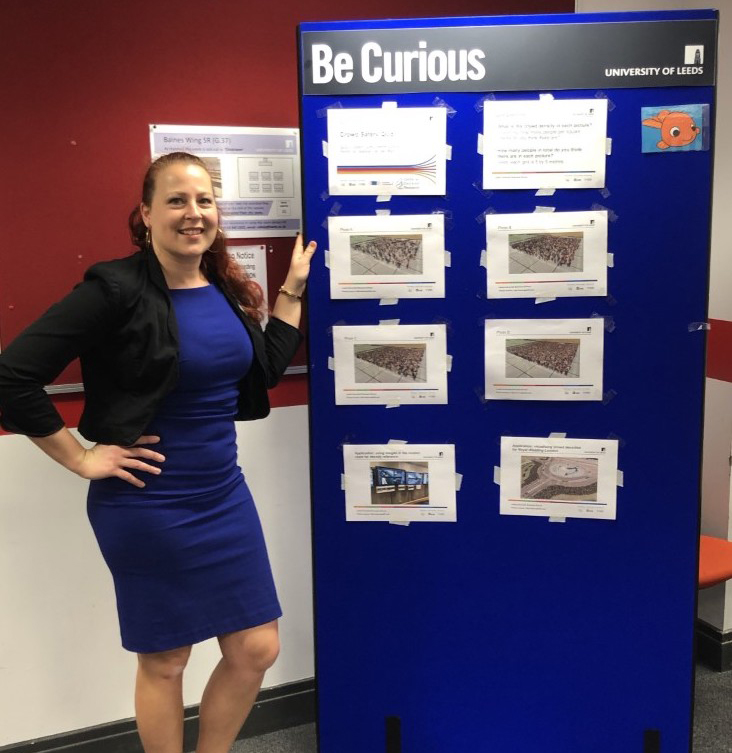 Bottles: I asked all the children in particular what they knew about evacuations or fire drills. I was amazed how well some very young visitors could tell me they would drop whatever they were doing so they could leave immediately, and in which line to stand and walk towards a nearest exit. Most children knew they have to look for a nearest exit in case of emergency and had practised fire drills at school. Not all the children knew that running can lead to congestion or slips/trips/falls. The activity with the bottles showed them what to do and that walking towards the exit can be safer and quicker than running.

Balloons, Square and a Circle. Thanks to a tip from a colleague in Social Psychology, Dr Anne Templeton, I used the balloon game to try make people happy and to encourage them to feel connected to one another. This was brilliant for the people visiting Be Curious as there were so many families and it was a perfect game for adults and children together. I used the square and circle idea from a course on crowd safety, run by Professor Keith Still, Manchester Metropolitan University. When I experienced this with other (adult) participants, it became so tangible and clear. Now at the Be Curious Festival, it was the first time I experienced it with so many children and prams as well. I have never fit 12 people in a square metre before! In addition, the playfulness of the children made it extra fun to do.

Quiz: Some of the visitors had participated in the People’s Vote Brexit March in London on 23 March 2019. I had hung up news articles about the people counting of this march, showing that different perspectives from different researchers had led to different numbers. This generated a lot of discussion. Visitors shared their experiences of being in the crowd and now understood how you could estimate the number of people there and how it might feel in a highly dense crowd.

Overall: Visitors were very positive and inquisitive. Both parents and children had fun with the activities and were all very eager to learn about evacuation research! My daughter and her father were a great help as well. There were so many visitors to show all the activities and talk about evacuation research. We all finished the day with a big smile.