Dr Mike Reynolds is a Teaching Fellow in Economics. His research interests lie within the areas of microeconomics and industrial economics. His current projects involve using mathematical models to consider issues involving competition, networks and regulation.

Imagine for a moment that a mysterious person gives you £10. However, you will only get the money on one condition: you as the proposer must split it with another and if that responder decides that the split is unfair then neither of you get the money.

Pure logic would dictate that the other person will accept any amount over 1p as that will see them better off than before. You get the £9.99 and trot off to spend it. Unfortunately, pure logic is not your friend here. Make such an offer and prepare for the responder to be disgusted by your unfair offer and reject it, even if it means that you both get zero.

The above scenario is known as an ‘ultimatum game’ and studies have found that people get some satisfaction from hurting proposers that make unfair offers. In the above example, it is not too surprising to expect a rejection of the 1p offer, but how much are people willing to forego to punish inequality? A 50:50 offer may imply true fairness, but people tend to be willing to accept less as generally, the rejection threshold is about 30% - a not too insignificant figure. In the case of £10, an offer of £3 or below would on average see the offer rejected by the responder and neither would get the money. The result of these ‘ultimatum game‘ experiments are often cited as evidence that people care about fairness and will enforce ‘fairness norms’ even to their own detriment.

One way we could consider fairness would be to look at the split of incomes in the whole of the UK. We would find that the general level of inequality (as measured by Gini coefficient and 90:10 ratio) across the UK grew during the late-80s and early-90, but has remained relatively stable in the last ten years with the 90th decile earning around 3.8 times more than that of the 10th decile in 2013. This, however, is a fairly crude representation and knowledge of such changes would require a very informed population. Unlike the ultimatum game, people do not have complete information and will compare their relative income using less formal methods from the cars, clothes and houses of their neighbours to media stories and the comparison of the experience of their own area with those they see on TV.

What emerged in recent years and highlighted during and after the referendum debate was some antagonism towards London - a place often perceived as the richest area of the UK with head offices of large corporations, a financial centre and where parliament resides as well as access to varied social and culture institutions. London is viewed as a place where decisions are made by politicians, ‘elites’ and the ‘establishment’. Precisely the very people that may be considered to be making an ‘offer’ concerning future incomes.

To be able to test the assertion that London is indeed the ‘richest’ region and consider what has happened to this over time, we need a measure of regional income. Here we shall use the Value Added (GVA) per Capita, a measure of the value of goods and services produced in a region for each person. This is not a great deal unlike GDP and should give us a good indication of the income of each region. Figure 1 shows the ratio of GVA per capita of London to each of the UK’s individual ‘regions’.

We can see from Figure 1 that London does have the largest income and that this has been the case since 1997. The South East is the closest region in terms of GVA per head, but in 2014 London’s value was 1.58 times higher. Wales is the worst off, as London has 2.34 times the GVA per capita of Wales in 2014 and that this has risen from 2.16 in 1997. That is to say that incomes in London have grown faster than incomes in Wales. In fact, between 1997 and 2014, incomes in London have grown faster than all other regions.

Other interesting points to note are the spike around the 2008 financial crisis, suggesting that incomes outside London were hurt more by the crisis than those inside, and the upward trend from 2010, when austerity measures came into effect, shows again that regional income growth has been below that of London. 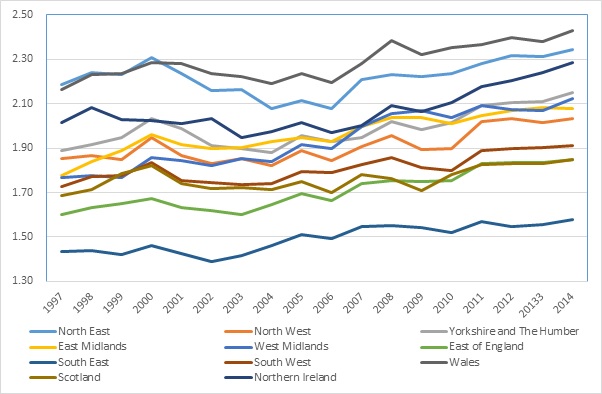 We could use Figure 1 to calculate the ‘offer’ that each region was made in 2014. For example, if London were a person, it would offer Wales £2.92 of the £10. However, we must remember that whilst we can expect the trends to roughly match people’s experience, there are other factors at play concerning the individuals’ experience of the inequality – factors such as costs of living and changing access and quality of state services are ignored here.

More detailed results by smaller geographical regions using a range of indicators would be interesting. Also, the rejection threshold is very dependent on the idea of ‘fairness norms’ of society and the individual, which will vary with individual characteristics that in turn vary region to region. Eric Kaufmann, Professor of Politics at Birkbeck College, has written about how an individual’s values impacted their voting preference on the LSE European Politics and Policy blog.

Despite painting with broad brush strokes, we can get a good idea of people’s perceptions concerning their economic position relative to Londoners. From Figure 1, we make the argument that London gets more and continues to get more and more. The Ultimatum Game tells us, even if people know they will be worse off themselves, they will still be willing to reject offers that they believe to be unfair in an effort to punish those that offered it.

Those dire economic forecasts for ‘Brexit’ made by the Remain camp may not have been ignored and could actually have been a major part of the decision by Leave voters to reject a status quo and punish a proposal that has been perceived as increasingly unfair.